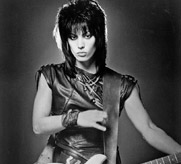 she commented on the film that tells the story of his band and on the performance of Kristen Stewart. The history of The Runaways was shown in 2010 in the movie 'The Runaways' - Girls of Rock, starring Kristen Stewart in the role of Joan Jett ( "She was extraordinary, it was great to work with her," says the artist, who served as executive producer of the film) and Dakota Fanning as Cherie Currie. For Joan, the principal merit of long was to present the band for the new generation. "I think that showed the many girls who did not know. AND I think it was one of the reasons why Kristen decided to make the film", says.